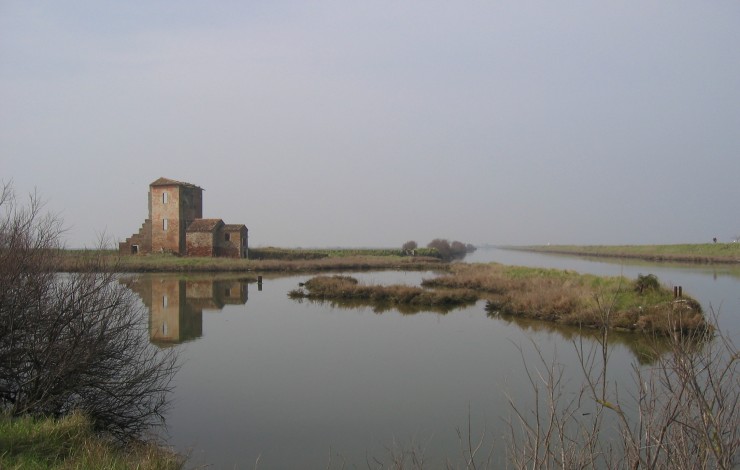 Departing  from the new tourist Port  located in Porto Corsini an amazing bike itinerary will bring you inside the Po Delta Natural Park located in our Region Emilia Romagna which covers some of the most productive and rich in biodiversity areas in Italy. The Park includes the country’s largest protected wetlands, areas of great ecological value. It is a territory rich in natural environments, housing hundreds of plant and animal species. Among the most important elements of the Delta landscape there are the so-called Valli (lagoons) and the Wetlands.

The fauna of the Delta del Po Delta Park is undoubtedly one of the most valuable elements of the protected area. Besides the Park’s 460 Vertebrate species, the birds of the Po Delta represent an extraordinarily precious heritage, with more than 300 reported species during the last decades, 150 of which are nesting and more than 180 wintering. Such richness turns the Park into the most important ornithological area in Italy and one of the most relevant in Europe. It’s possible to see some very rare species at an international level, such as the Pygmy Cormorant, the Rüppell’s Warbler and the Flamingo, with one of the few European colonies.

Departure from pier with proper bikes in order to ride totally about 25 Km inside the Natural Park of Po Delta.

After few Km we will stop in an area called Pialassa della Baiona for birdwatching. The tour proceeds towards a small and nice seaside town and then up to the Reno river which we will follow inside the lagoon for about 13 Km.  An amazing view will surely catch your attention mainly around the area called Boscoforte, a little peninsula inside the lagoon. After that we will cross the Reno river by ferry boat reaching another small town called Sant’Alberto.

Here we will stop for an interesting visit to the Natural Science and Ornithological  Museum of Ravenna: a wide collection of birds and tipical fauna of the park are exhibited inside a precious and historical palace of the 15thcentury. Our bike tour is finished and now it’s time for a light but delicious buffet based on tipical local products by the Agriturismo Tenuta Augusta, just 15’drive by bus. Return back to the ship by bus (20 minutes time).

This tour requires physical effort to ride approx 20 km on flat bike routes.
This tour  is not recommended for guests suffering of heart diseases or similar, breathing diseases or similar.
Biking suit and shoes are recommended (also wind jacket,  cap and sun protective cream)
Restroom facilities are located at the Agriturismo Tenuta Augusta.
Timing of the tour may slightly change according to the biking speed or to  guests’ special  requests
Entrance fees and ferry boat tickets are not included.