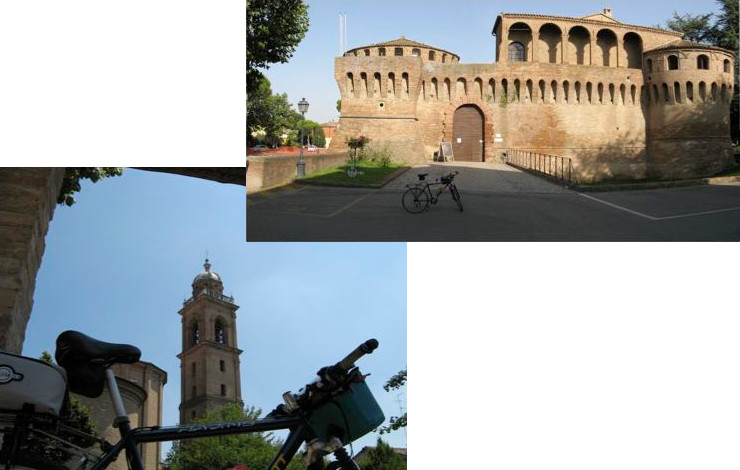 All around the surrounding area of Ravenna among several locations we suggest to visit three little towns: Bagnacavallo, Lugo and Bagnara of Romagna. And the best way to enjoy the visit of those locations is riding “the bike”, which is the most popular and ancient means of transport of this area.

In the middle of the countryside we will discover ancient parish churches, abbeys, medieval rests, castles…

Departing by bus from the pier of Porto Corsini (just outside Ravenna), a 45′ drive will bring the group to the first town called Bagnacavallo.

It is one of the most interesting towns of the province; its name is thought to originate from an hypothetical spa whose water healed the horse of the Roman emperor Tiberius. The town centre is well preserved, with its Medieval irregular structure, scenographical arcades and a wide number of palaces and religious buildings. A visit to the town centre is foreseen and after that our biking tour will begin from the main square towards Lugo, after pedalling 6 Km.  This is quite an important town and you will appreciate its historical centre and the famous castle called “Rocca Estense”, symbol of the town (now the Town Headquarters); it dates back to the end of the XVIth century and  inside there is an interestinghanging garden.

In the very centre of the town the monumental four-side portico known as Pavaglione,  built between 1771 and 1783 to house the thriving silk worms market. Today the building hosts a XVIth century old market and is the setting for cultural events and shows.

Now our tour will continue towards another medieval town. After 11 Km we will reach Bagnara of Romagna, which still preserves its original Medieval stronghold; the fascinating town centre is surrounded by late XVth century walls with an entrance tower and five small towers.

The castle, named Rocca Sforzesca, is the symbol of the small town, together with its Renaissance atmosphere and original architectural features such as arcades, courtyards and wooden ceilings. The building houses the museum of the Castle, with an archaeological collection including local findings dating back to the Bronze Age, the Roman time and the Middle Ages. Surrounded by this fascinating atmosphere you will enjoy a light buffet and after that the bus will bring the group back to the ship in about an hour time.

Restroom facilities are located at the Locanda di Bagnara.

Entrance fees and ferry boat tickets are not included.